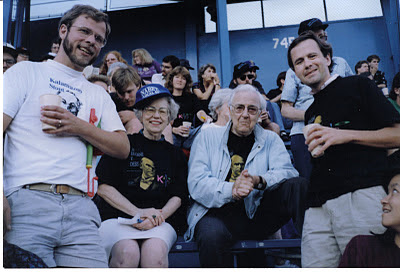 Nearly 200 leaders in the state’s craft brewing industry were present at the Michigan Brewers Guild annual conference which took place at Shanty Creek Resort in Bellaire last week, where the inaugural “Tom Burns Award” – recognizing the pioneering spirit of the “Great Beer State” – was presented to Larry Bell of Bell’s Brewery in Galesburg, Michigan.

According to Eric Briggeman, President of the Michigan Brewers Guild, Larry Bell was one of four nominees for the award, the others being Ron Jeffries from Jolly Pumpkin Artisan Ales, Fred Bueltmann from New Holland Brewing Co., and John Linardos from Motor City Brewing Works.

“The nominations were submitted by members of the Guild’s Board of Directors and Government Affairs Committee,” Briggeman stated. “Tom Burns truly was a pioneer for the Michigan brewing industry, and the Guild felt that naming this award after him was a great way to honor Tom as a person, while recognizing his legacy that has been the foundation for the “Great Beer State!’”

Briggeman was joined by Priscilla Burns, Tom’s widow, and Tom Brandel, close friend and founder of Tom’s Oyster Bar, for the presentation.

“Each of the four nominees were qualified candidates for this award,” Briggeman said. “Yet, given the fact that Larry holds the oldest ‘microbrewery’ license in Michigan, and he worked very closely with Tom Burns on shaping our state’s brewing legislation in the early 1990s, we felt he was the clear choice as the recipient of this inaugural award.”

Laura Bell accepted the award on behalf of Larry, who was out of the country and unable to attend. She read this letter sent from Larry, addressed to the group:

“Everyone in this room has been affected by Tom's efforts back in the nineties. His push for, and success at getting brewpub language adopted in the state laws paved the way for what is now one of the most dynamic brewery scenes in the USA. While there may be those today that think that trading away self distribution wasn't right, Tom and I thought we cut a pretty damn good deal, and I still think that.

Tom was able to get legislation enacted because he knew the importance of building consensus, and he knew that it was essential to have dialogue with all of the legislators involved, as well as reaching out openly, and with a eye toward fairness, to Michigan's wholesalers; he respected the realities of the situation while trying to enact change. And enact change he did.

I am glad that we are honoring Tom as I feel that his contributions to the early days of craft brewing are often buried by people who want to take more credit than they deserve. He was one of those people who was there at the dawn of the movement. I have in my collection a bottle of "Legal Lager" that Tom brewed at the Cartwright Brewing Co. in Portland back in the early eighties when, I believe he was in law school. He brewed at the goat shed with Boulder Brewing. And he was in on the start of the then American Homebrewers Association Beer Festival, now the GABF [Great American Beer Festival].

It was heartbreaking to see Tom get sick. Having been through a "mild" cancer myself I have an inkling of the terror it brings to ones soul. But Tom was always upbeat when I saw him and never became morose, even as his diagnosis got worse.

I was very honored to be asked by Priscilla to be the brewer representative pall bearer at Tom's funeral. It was a difficult day for me. To see one's contemporary die too young is a very troubling thing. After the funeral service we went to Tom's Oyster Bar, a place Mr. Burns loved to go, and I stood in for him – singing show tunes with the piano player as a way to pay my respects. Tom loved a good show tune. And a great beer.

Though Tom's life was too short he left an important legacy that we all can honor and that honors us all. I was proud to call him a friend and I am proud of the Guild for honoring him today. So please, let's raise our glass and toast Tom Burns.”

Larry Bell moved to Kalamazoo in 1976 to study history at Kalamazoo College, seven years before opening the homebrew shop that would soon grow into Bell’s Brewery. He opened Bell’s Brewery in 1985, with a 15-gallon soup kettle and $200. Since then, he has grown Bell’s into one of the largest regional craft breweries in the country.

Larry spends his time between Chicago, Kalamazoo and the Upper Peninsula. He enjoys traveling, the Chicago Cubs, and is an active collector of art, breweriana, and maps, among other things.

Michigan’s thriving brewing industry conservatively contributes over $24 million in wages with a total economic contribution of more than $133 million. In terms of overall number breweries, microbreweries and brewpubs, Michigan ranks #5 in the nation – thus supporting its claim as “The Great Beer State.”

The Michigan Brewers Guild exists to unify the Michigan brewing community; to increase sales of Michigan-brewed beer through promotions, marketing, public awareness and consumer education; and to monitor and assure a healthy beer industry within the state. For more information, including a list of Michigan microbreweries, log on to www.michiganbrewersguild.org.
Posted by Dianna - Promote Michigan at 2:58 PM

Congratulations, Larry. You deserve this. It is stirring to see this award named for Tom, who contributed so much to the heritage and industry of craft brewing in Michigan. The picture of the two of you is priceless. A pint of Detroit and Mackinaw pale ale after a hard day's work still stands as one of the greatest local beer pleasures I have ever had; Two Hearted Ale is standing in honorably in its absence.