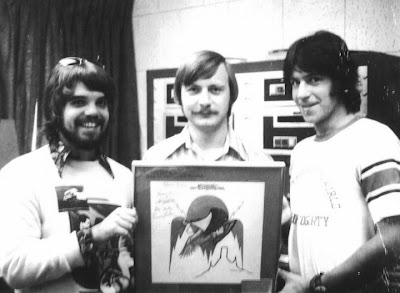 In the mid-1970s, The Eagles were emerging on the music scene and in March, 1974 Asylum Elektra released the band’s third album – “On the Border.”

The first single released from the album was “Already Gone” which hit the air on April 19, making its way to #32. The second single, “James Dean,” was released on August 14 and only made it to #77.

During the late summer, Jim Higgs, a DJ and Program and Music Director at WKMI 1360-AM in Kalamazoo, Michigan, found a different track on the album which appealed to him and the station began playing “Best of My Love” – a song written by Don Henley, Glenn Frey and JD Souther.

Listeners in the Southwest Michigan town responded favorably and it soon became the top requested single in the market. Because the track was not available as a single, local record stores were selling out of the album, having to request more to meet demand. Higgs charted the album track on WKMI's Top 30 Survey and kept asking the record label to release the song as a single. At one point Elektra-Asylum, not yet willing to give up on "James Dean" nationally, actually considered having a thousand copies pressed to send to stores in Kalamazoo.

Finally, on the basis of "Best Of My Love's" success on WKMI and the diminishing popularity of "James Dean," in November of that year, executives at Asylum Elektra took a chance on the song and released it nationally.

“Best of My Love” climbed the Hot 100 chart and in March, 1975, it became The Eagles first #1 single (it also topped the easy listening/AC chart for one week, a month earlier).

“On The Border” ultimately reached #17 on the album charts, selling 2 million copies. In 1975, Rip Pelli and Burt Stein from Asylum Elektra, presented Higgs with an autographed copy of the album cover for his contributions to its success and the contributions made on behalf of “Best of My Love.”

Jim Higgs began his radio career in 1962, at the age of 17 and just two months after graduating from Plainwell High School. This year marks his 52nd year in the industry. He still broadcasts live six days a week, during the morning drive, on AM-980, WAKV – a station he owns and operates in his house. A more detailed history of his career can be found here.

WKMI began broadcasting in 1947 and was a highly-rated Top 40 music station from the 1950s through the late 1970s. The format changed to Adult Contemporary in the early 1980s, then switched to its current talk format in 1990.

On September 8, Higgs and his family will be attending The Eagles concert at Van Andel Arena in Grand Rapids, where they will have the opportunity to go back stage to meet the band.

Posted by Dianna - Promote Michigan at 9:21 AM