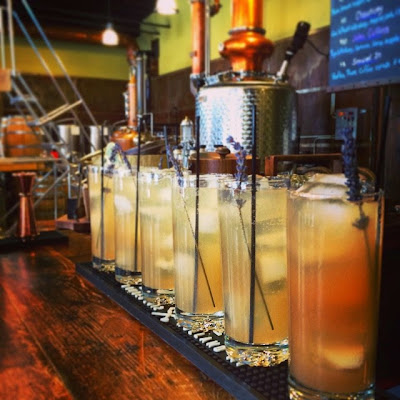 In anticipation of the upcoming Tulip Time Festival (May 2-9), Holland-based Coppercraft Distillery has introduced the Copper Tulip—a cocktail featuring Genever, a new spirit made locally to celebrate the region’s rich Dutch heritage. The cocktail was unveiled Thursday evening at the First Bloom Poster Release Party for the 2015 Tulip Time Festival, held at Evergreen Commons.

The Copper Tulip features Coppercraft’s Genever; a traditional Dutch spirit that features juniper, however it has more grain/malt flavors that are not commonly associate with gin. It also delivers more botanical and floral notes than juniper-forward gins.

“I was able to taste our Genever last weekend and spent all day refining the Copper Tulip cocktail,” says Jenney Grant, General Manager at Coppercraft. “I am really excited to share this spirit and cocktail with our community”.

“The grain selected by Coppercraft for Genever is a locally grown white winter wheat,” according to Walter Catton, owner and distiller of Coppercraft Distillery. To make the product even more localized, those grains were then milled at the De Zwaan Windmill on Windmill Island. This year marks the 50th year that the 254-year-old DeZwaan Windmill has called Holland its home.

De Zwaan’s name is Dutch for The Swan or Graceful Bird. First was erected in Krommenie, Netherlands in 1761, DeZwaan made its way to Michigan aboard the Prins Willem van Oranje in October, 1964.

It took approximately 6 months to reconstruct the 125-foot windmill, which is located on Windmill Island, a 36-acre site on the eastern end of Lake Macatawa. Formally dedicated in April 1965, the mill and the island welcome some 55,000 tourists each year.

It is the only authentic, working Dutch windmill in the United States. When winds are favorable (15 to 20 miles per hour from the west), De Zwaan's 80-foot diameter blades are usually in motion. Throughout its seven-month season, the mill works to produce stone-ground whole wheat flour, from grains sourced locally, which is available for purchase.

Genever will be released in bottle format through Coppercraft’s tasting room, and the Copper Tulip will be served throughout Holland during the 86th annual Tulip Time Festival starting May 2nd. “We are excited and honored to partner with Windmill Island and Tulip Time to share the results with many of the Holland area restaurants serving the Copper Tulip cocktail during the festival,” says Catton.

Coppercraft will also be releasing a short video that documents the process of creating Genever and the Copper Tulip. This video will be released during the festival as well.

“It doesn’t get any more Holland than this,” Grant says.

Posted by Dianna - Promote Michigan at 7:42 AM