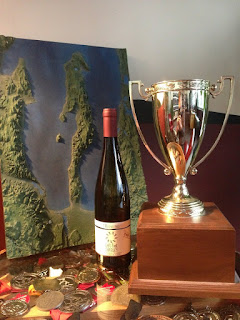 Left Foot Charley Winery in Traverse City has recently been awarded a prestigious Jefferson Cup for its 2011 Riesling – Seven Hill Farm, Old Mission Peninsula in the “White Vinifera Wine” category. It was the only Michigan wine to make the list this year.

The 30th Annual Jefferson Cup Invitational took place in mid November in Kansas City, MO. This noted competition features wines that are pre-selected to exemplify viticultural and winemaking in America. The invited wines have all proven their excellence in competitions and tastings throughout the year, and according to organizers, are extremely deserving of the nation’s attention.

From the original 700 invited wines, came 79 which were selected as nominees for the Jefferson Cup – and only 29 wines made that final list – including LFC’s Riesling.

"Earning a Jefferson Cup for Left Foot Charley has been on my radar for years,” says owner/winemaker Bryan Ulbrich. “This was the first time we had enough wine to enter into the invitational competition.”

The grapes for the 2011 Left Foot Charley Riesling were grown by Tom Scheuerman in a small, two-acre vineyard on the Old Mission Peninsula called Seventh Hill Farm. Only 310 cases of this medium sweet Riesling were produced, and fewer than 100 cases remain. It sells for $23.

“This is an excellent example of Riesling that will age gracefully over the next decade – truly one of the great vintages for this vineyard,” Ulbrich says. “I am so proud of Tom and our cellar staff's commitment to excellence – it has been a team effort 14 years in the making. Riesling loves Michigan!"

In all, LFC submitted five wines to be judged. The 2011 Missing Spire Riesling earned a Medal of Excellence (gold equivalent), while the Blaufrankisch 2011, Pinot Blanc 2011 and Pinot Gris 2011 each received a Medal of Merit (silver equivalent). Several other Michigan wines also showed well in this esteemed competition, receiving the equivalent of gold and silver medal status).

With more than a dozen years of winemaking to his credit at a handful of Northern Michigan wineries, Ulbrich launched his first 200 cases of Riesling under the LFC label in 2004. He and his wife, Jennifer, created Northern Michigan’s first urban winery in the center of the historic Northern Michigan Asylum – now known as The Village at Grand Traverse Commons. Ulbrich is quietly gathering the region’s top small vineyards and is showcasing them in the new LFC facility, which has been open since July 2007.

Posted by Dianna - Promote Michigan at 7:38 AM