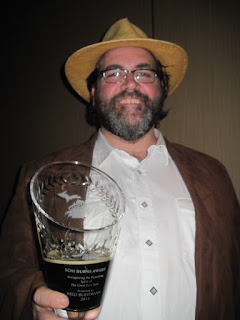 Nearly 200 leaders in the state’s craft brewing industry were present at the Michigan Brewers Guild annual conference which took place at the Radisson Plaza Hotel, where the “Tom Burns Award” – recognizing the pioneering spirit of the “Great Beer State” – was presented to Fred Bueltmann of New Holland Brewing Company

“As a past President of the Brewers Guild, and a mentor to many in our industry, there isn’t a person who is more deserving of the Tom Burns award,” says Eric Briggeman, Guild President. “Fred is very active at both the local and national level and is one of the top promoters of the Michigan beer scene. His passion for championing craft beer and the Michigan Brewers Guild is second to none.”

Bueltmann – aka “The Beervangelist” – is a managing partner in New Holland Brewing Company, Past President of the Michigan Brewers Guild and Certified Cicerone™. An avid home cook and expert at pairing beers, he’s an ardent advocate for quality food and craft beer’s place at the table. Bueltmann serves as a judge for the Brewers Association’s Great American Beer Festival and authors of “Beer and Food with the Beervangelist,” a regular column in Michigan’s “Food for Thought” and “Flavor 616” magazines. Fred’s first book, “Beervangelist’s Guide to the Galaxy” is due in Spring of 2013.

“The Michigan beer scene is a beautiful thing to behold, due in large part to the efforts of the Michigan Brewer’s Guild,” says Bueltmann. “I am immensely proud of the organization and continually inspired by the cast of characters that make up our Michigan brewing community. I am honored and humbled to receive the Tom Burns recognition award. I strive to live up to the example he set with his remarkable and pioneering spirit.”

“Nominations for the award were submitted by members of the Guild’s Board of Directors,” Briggeman stated. “Tom Burns truly was a pioneer for the Michigan brewing industry, and the Guild felt that naming this award after him was a great way to honor Tom as a person, while recognizing his legacy that has been the foundation for the “Great Beer State!’”

Michigan’s thriving brewing industry conservatively contributes more than $24 million in wages with a total economic contribution of more than $133 million. In terms of overall number breweries, microbreweries and brewpubs, Michigan ranks #5 in the nation – thus supporting its claim as “The Great Beer State.”

The Michigan Brewers Guild exists to unify the community of brewers, to increase the sale of Michigan Craft Beer, to contribute culturally and economically throughout the state, and to monitor and assure a healthy brewing industry. By working collaboratively with proponents of craft beer, we strive to achieve 10% share of all beer sold in Michigan by producing world-class events, increasing public awareness, educating consumers, and encouraging responsible consumption. For more information, including a list of Michigan microbreweries, log on to www.MiBeer.com.

Posted by Dianna - Promote Michigan at 6:05 AM