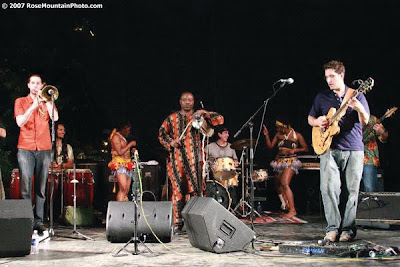 An Oktoberfest-style celebration is on-tap to draw hundreds of people to downtown Benton Harbor, Mich. Sept. 15 from noon to 10 p.m. Artoberfest 2012 will showcase regional talent, brew masters and wineries in an outdoor venue located at 190 5th St. in the Benton Harbor Arts District. The event is free entry noon – 5 p.m. and $5 after 5 p.m. All proceeds will benefit the New Territory Arts Association.

The Artoberfest festival offers fun activities for the entire family.

• Headliner band, Chicago Afrobeat Project (CAbP), will perform at 7 p.m. It’s a regional coup to snap up this band as it is playing in some of the hottest clubs and most prestigious festivals across the country. A leader in the non-traditional afrobeat movement, CAbP’s music is described as “an expression of world cultural unity and social awareness within a medium of music, dance and rebellious celebration.” With influences from juju, highlife, American funk, afro-Cuban, experimental jazz and rock, the band’s music is both melodic and hard-hitting. The group promises a stellar performance with selections from its new, fourth album “Nyash Up!”

• Regional musicians will also perform throughout the day. Trachead Entertainment will deliver a positive message through its lively, inspirational music starting at 3 p.m. Benton Harbor’s own Char Jones and Friends will warm up the crowd before CAbP takes the stage.

• Between the professional acts, area youth will present a range of artistic talent on stage.

• An art fair will display regional professional and student artists from noon-7p.m.

• A highlight of Artoberfest will be regional microbrews. Michigan breweries on tap will be Arcadia, Livery, Founders and Shorts. National brewery Lagunitas will also showcase its beer. In addition, St. Julian wine and local food will be available for purchase.

The New Territory Arts Association (NTAA) is a not-for-profit, grassroots organization dedicated to the revitalization of Benton Harbor through the arts. Founded in 1999, it has been responsible for many special Arts District events and arts-related programming. Through murals and banners, art auctions and festivals, quarterly Art Hop celebrations, arts education programming and scholarships, the NTAA helps create a unique, dynamic environment in downtown Benton Harbor for artists, visitors, area residents and business owners.

For more information about Artoberfest or to volunteer for this or other NTAA events and activities, contact: info@newterritoryarts.org, call 269.926.1926 or visit www.newterritoryarts.org.
Posted by Dianna - Promote Michigan at 1:47 PM No comments: 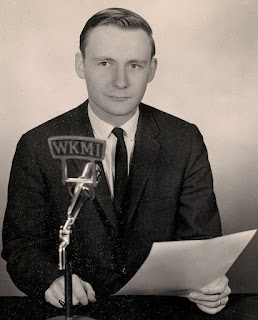 In August, 1962 – just two months out of high school – 18-year-old Jim Higgs went into a 12-by-60 house-trailer on the banks of the Kalamazoo River, west of Otsego, for a job interview. The building was marked with the radio station call letters WDMC-AM980. His brief audition must have impressed the owners, because the next day, he started his illustrious career as one of the most noted voices in West Michigan radio. Today, 50 years later, Higgs remains an integral part of the “morning drive” radio time for listeners throughout the greater Kalamazoo area on AM980, WAKV.

Jim’s first stint in Otsego was brief – and by the following summer, he’d accepted an announcer position with WHTC-AM/FM in Holland.

“It was here that I honed my broadcast skills,” Jim says, “doing everything – including announcing, news gathering and writing, and even some sports broadcasting.”

After four years in Holland, Jim made the move in April, 1967, to WKMI in Kalamazoo, serving multiple roles including News Director, Program Director, Music Director and on-air personality for the morning drive shift.

“During the ‘70s, WKMI rose to the top rated position in the Kalamazoo market and was one of the most influential Top 40 stations in the Midwest,” Jim says.

During his years at WKMI, Jim and his cast of characters put Kalamazoo radio on the map – drawing a large fan base and recognition from industry leaders, both regionally and nationally. This was an era of radio when recording artists recognized the value of building relationships with the on-air personalities. Among those who stepped into the studio was legendary broadcaster Wolfman Jack.

Of note during Jim’s years at WKMI was his influence in helping the band The Eagles land their first #1 record.

In August 1974, Elektra-Asylum released the single “James Dean,” from the On the Border album. The band, which formed in 1971, had earned a few Top 10 hits, but really wasn’t a household name – yet. While the label was aggressively pushing “James Dean,” Jim says he chose to play the flip side – a soft ballad written by Don Henley, Glenn Frey and J.D. Souther. The song, became an instant hit in the Kalamazoo market – so much so that local record stores couldn’t keep On the Border in stock.

While “James Dean” struggled (it never ranked higher than #77 on the charts), Jim was trying to convince executives at Elektra-Asylum to release this flip-side as a single. They ignored his recommendation. Yet, before long, other stations in Michigan – including some in the high-powered Detroit market – started getting requests for this non-released single. It took Michigan by storm! Label execs finally took notice and in November, 1974 officially released this single nationally. The song flew up the Billboard Hot 100 charts and by March, 1975, The Eagles had landed their first #1 of many hits – “Best of My Love.”

Although the album itself never went platinum, representatives from Elektra-Aslyum later that year presented Jim with an autographed copy of the cover of the On the Border album – which still hangs proudly in his office. An account of this story is also scheduled to be featured in the book Blast From Your Past: Rock & Roll Radio DJs by LinDee Rochelle (www.blastfromyourpast.net).

Following 13 notable years at WKMI, Jim moved on to WNWN - Stereo Country 98, as an on-air personality and later as Program Director, where he worked from 1980 to early 1983.

In 1983, Jim joined forces with several other local radio industry leaders to buy WAOP AM/FM in Otsego (formerly WDMC, the station where he had started 20 years earlier). The station soon became WQXC (Quixie) and the group purchased other stations, including WBNZ in Benzonia and WSTR in Sturgis. While there, Jim jumped back into the morning drive seat, while also serving as Program Director.

It was while at WQXC that Jim’s daughter, Dianna, joined the family business – working weekend programming and later as a news broadcaster from 1987 until 1992.

By 1993, the corporation which owned Quixie (now Cool 101) dissolved, and Jim and his wife, Suzanne, took ownership of the AM station – WAKV AM980. Together, they’re among the six on-air personalities that make up “The Memory Station” – formatted with much of the same playlists that were popular during Jim’s earlier years in the industry. The station operates out of the basement of their home.

“It is geared to people of our age,” Jim says. “I do the live morning show, Suzanne is on in the evenings.” Among the other announcers are those who played a part in Jim’s career over the years – including Tom Somers (who graduated from Plainwell High School with Jim), former WKMI vets Bill Anthony and Phil Britain, and Tom Meiser.

Jim’s daughter still has an active presence on WAKV, with “Promote Michigan” a 90-second segment that runs weekdays at 2pm and “West Michigan Weekend” – a 2-minute segment that airs Friday mornings at 9:10. Over the years, several grandchildren have also worked at the station – including Jim’s granddaughter (Dianna’s daughter), Mollie, who has voiced a couple commercials and weather forecasts.

An avid genealogist, Jim lives in Plainwell – in the house where his mother grew up – and is the second of four generations to graduate from Plainwell High School. Over the years, he’s been active in various aspects of government with the City of Plainwell, including six years as mayor and terms on the Planning Commission, Downtown Development Authority, Library Board and Airport Board. He's also vice-president of the Anna R. Pipp Foundation, which provides scholarships to local high school graduates and cash grants for various local endeavors. He and his wife, Suzanne, have been married for 19 years and between them have four children and 10 grandchildren.

Posted by Dianna - Promote Michigan at 9:02 AM 2 comments: 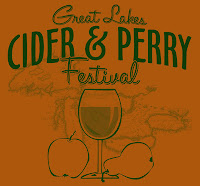 Entertainment this year will be provided by the Fading World Band, from 1-5pm. Established in 2003, this Mid-Michigan band delivers a “fusion” of music that includes classic oldies, pop and show tunes and country songs, dating back from the early 1900s to the 1980s.

Tickets for the 5th Annual Great Lakes Cider & Perry Festival may be purchased online at http://www.greatlakescider.com/ciderfest.html. All profit proceeds from the festival benefit the Great Lake Cider & Perry Association (est. 2008). Find them online at www.GreatLakesCider.com.

Posted by Dianna - Promote Michigan at 12:18 PM No comments: 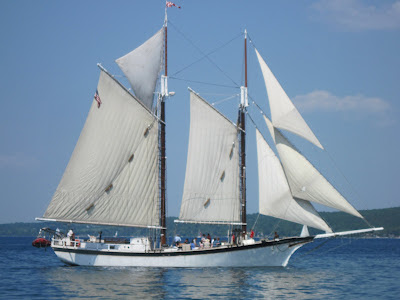 Since 1987, the Traverse Tall Ship Company has been offering sailing adventures on the freshwater Grand Traverse Bay – and beyond, into Northern Lake Michigan.

As one of the largest sailing ships on the Great Lakes, the Manitou is a replica of an 1800s “coasting” cargo schooner. A traditional two-masted, gaff rigged, topsail schooner, Manitou measures 114 feet in length with more than 3000 square feet of sail.

During the month of September, the Manitou is once again offering its popular windjammer excursions. These multi-day outings give passengers a one-of-a-kind experience to head out into the open waters and enjoy a relaxing, stress-free get-away, while visiting quaint coastal villages and soaking up the panoramic views of the northern Michigan shoreline.

With a 59 passenger sailing capacity (24 overnight capacity), there is plenty of space for sitting and moving around the decks while under sail. While aboard the Manitou, passengers are free to leave the sailing to the experienced crew or lend a hand and learn the arts of the sailor. An excursion aboard the Manitou allows you to remove yourself from the trappings of modern life: no TV, phone (cell phones are discouraged), internet, email and definitely no itinerary.

In addition to public day sails and multi-day windjammer cruises, the schooner Manitou works with Inland Seas Education Association, providing hands-on environmental education to school kids from throughout the region and state. The Manitou is also available for private charters, making it ideal for corporate outings, wedding parties and family reunions.

Earlier this year, thanks to a community effort involving the City of Traverse City, Discovery Center Great Lakes, Elmwood Township and Traverse City Light and Power, Traverse Tall Ship relocated just a short distance north of its former home, to the Discovery Center Great Lakes at 13258 S.W. Bay Shore Drive (M22), Traverse City (right across from what long-time residents refer to as the “coal dock.”). The dock has served as home for the Maritime Heritage Alliance fleet for some time, and the Manitou ads to the nautical experience of the area.

To make reservations for any of the 2012 Manitou sailing adventures, call toll free 800-678-0383. Gift certificates are also available. For additional information about the Manitou, including its corporate charters, log on to www.tallshipsailing.com (www.facebook.com/TallShipManitou).

Posted by Dianna - Promote Michigan at 9:33 AM No comments: