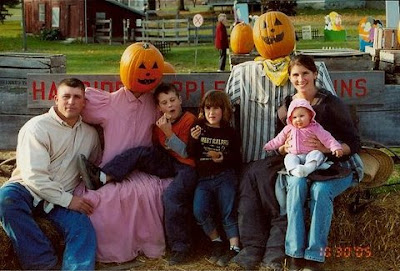 Twenty farms in the Greater Grand Rapids area are participating in this year’s Kent Harvest Trails, providing families the opportunity to enjoy loads of country fun. Activities and tours begin mid September and run through the end of October (although farms may actually open sooner and extend their season into early November, weather permitting).

Families can take tractor- or horse-drawn wagon rides through the orchards or to the pumpkin patch, visit with animals in the petting zoo, wander the corn maze and make a scarecrow to take home. Enjoy a fresh baked donut and watch as apples are pressed into sweet cider. Visit the farm markets for local produce or head out to pick your own fruit. Then, shop for baked goods, fall plants, home decorations and seasonal gifts. Admission for many farms is free, although there may be charges for certain activities.

An updated map of participating farms, including directions and dates/hours of operation, will be posted online in mid August at KentHarvestTrails.org. Printed brochures will also be available for free at area Family Fare Supermarket or D&W Fresh Market locations starting the second week of September.

Posted by Dianna - Promote Michigan at 1:15 PM No comments: 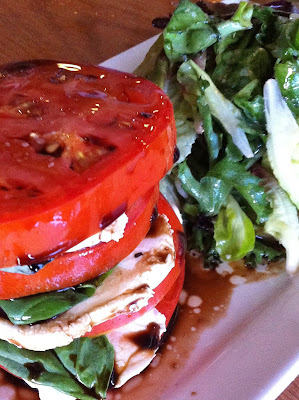 Harmony Brewing Company is set to expand their already very successful wood fired pizza focused menu with new lunch options. The new lunch menu will feature sandwiches toasted in the wood fired oven and generously portioned creative salad options. Lunch will be available starting on August 1. Harmony will be opening an hour earlier, at 11am to accommodate the new lunch crowd. These will be the new hours going forward.

Harmony’s new lunch menu relies heavily on locally sourced products. Every menu item contains multiple local ingredients. Sandwiches begin with a baguette from Nantucket baking company which is toasted in a wood fired oven. It is then loaded with ingredients ranging from pulled pork from S&S farms on the Wilcox Pork Sandwich, white cannellini beans from Winter Calico Field Farm on the (vegan) Sid Delicious Sandwich or basil from Vertical Paradise farms on the Southeast Side Sausage Sandwich. Michigan’s summer produce is also the star in all of the new lunch salads.

Harmony has also created a new lower ABV beer for enjoying with lunch. The Grand Daddy Rapids is cream ale with 4% alcohol. This straw colored beer has a malty nose, a light crisp body and a touch of sweetness. It’s a light beer that will satisfy the tastes of microbrew connoisseurs.

Posted by Dianna - Promote Michigan at 1:01 PM No comments: 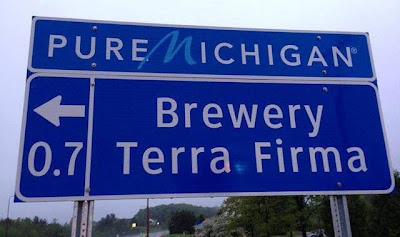 Brewery Terra Firma opened its doors at 2959 Hartman Rd. on the historic 10-acre Dracka Farm just south of the Grand Traverse Mall over the 4th of July Holiday. The brewery is now pouring seven beers crafted onsite and will eventually house 40 taps of Brewery Terra Firma beers. Taproom hours are 10am-10pm Monday through Saturday and 2pm to 9pm on Sunday.

The brewery is primarily a production facility which will be distributing it’s beer in the seven county area surrounding Traverse City serviced by H. Cox & Son. Distribution began early this week with Manitou Amber Ale and Gladstone American Pale Ale already arriving in local establishments. The taproom adjacent to the brew house seats 64 people along with an outdoor beer garden. Food is not prepared onsite; patrons are welcomed and encouraged to bring their own food. Local snacks and soda will also be available to compliment the wide variety of beer.

Brewery Terra Firma (Terra Firma-Latin for Solid Earth) sits on ten acres of farmland that will generate ingredients used by the brewery to make its beers. Hops, herbs, fruits, vegetables and even honey will be produced, using sustainable production methods, environmentally conscious waste management and innovative water and heat reclamation systems. Brewery Terra Firma will be a contributor to the local economy of Traverse City and is already becoming a model for the next level of ultra-efficient microbreweries. The goal of Brewery Terra Firma is to brew the best beer possible, and to respect the land, the community, their patrons and their employees while doing so. Terra Firma is the vision of Brew Master, John Niedermaier.

For more information on the brewery, visit Brewery Terra Firma on Facebook or at BreweryTerraFirma.com.

Posted by Dianna - Promote Michigan at 9:18 AM No comments: 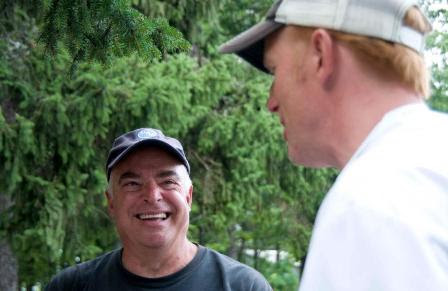 In the global culinary scene, there’s a growing interest in returning to the basic philosophy of sourcing local – a foundation on which the earliest pubs and restaurants were built. In Michigan, one of the pioneers of this slow food movement is Chef Paul Olson of Mission Table restaurant.

An appreciative supporter of regional growers and producers, Olson’s passion for what’s available seasonally in his own Old Mission Peninsula backyard is the focus of a new video called “Farm-to-Table” from filmmaker Evan Joling. It is the second in a 3-video collaborative series from Northern United Brewing Company.*

Featuring music by Michigan singer/songwriter Danny Kline, the 1:56-minute video shows Olson stopping off at the Santucci Farm for the day’s harvest – items that are taken back to the kitchen and are crafted into a variety of entrees, sides, desserts and artisanal cocktails on the Mission Table menu.

“We craft our ever-changing, seasonal menu around what’s available on the Peninsula first,” says Olson, who – along with wife Barbara Olson (Events Director) and peninsula natives and historic preservationists Jon Carlson and Greg Lobdell – is a managing partner in the business.

“We grow our own herbs on-site and purchase as much meat, poultry and produce from local farmers and growers as we can,” Olson says. “The hour it takes from harvest to delivery ensures that our strawberries, blueberries, arugula, tomatoes and other vegetables are as fresh as possible. Once we’re back to the kitchen, we take what’s before us and collaborate on the evening’s ever-changing menu.”

Much of Mission Table’s produce is also sourced from nearby Kroupa Farms – a decision not made solely based on proximity.

“We have a great appreciation for John Kroupa and all he does to work with us,” says Lobdell. “He really built the gardens as a special favor to us and the fact that he personally delivers to us is really quite amazing.”

With a common focus on conservation and sustainable practices, it’s no wonder good things are brewing between these businesses.

“They also use more labor-intensive practices than many farms,” says Olson. “This reliance on human touch continues with the farm’s dedication to pulling or hoeing weeds by hand in the gardens and vineyards. It’s just one more way they minimize chemical use and the farm’s overall impact on the environment.”

It’s this type of mutual mindset that also lead to the creation of Bonafide Wine brands – which was introduced to the marketplace in 2010. Most of the grapes for the limited-release brand are grown in either the nearby estate vineyards of Peninsula Cellars or the 3-acre Bonafide Vineyard and are crafted by Kroupa – a passionate and talented winemaker.

A Michigan native, Olson is a graduate of both Michigan State University and the Culinary Institute of America in Hyde Park, NY. He honed his skills in New York City and Connecticut, before returning to Northern Michigan.

Once known as the Bowers Harbor Inn, the award-winning eatery was purchased by Carlson and Lobdell in 2006 and was rebranded as Mission Table in 2010. Welcoming visitors for generations, the 1880s-era building was once the summer retreat for Chicago lumber baron J.W. Stickney and his wife, Genevive.

Sprawling out over a lush 11-acre parcel – which also encompasses the Jolly Pumpkin Brewery & Pub – Mission Table boasts 700 feet of waterfront, nestled beneath majestic oaks and pines. Unparalleled views of the West Grand Traverse Bay and Power Island make this one of the region’s most popular al fresco dining establishments. The restaurant also boasts a 2300-square-foot Tasting Room, where samples of more than two dozen products – including North Peak and Jolly Pumpkin beers, Civilized Spirits and Bonafide Wines – are served.

Mission Table is open throughout the summer, Sunday through Thursday from 5-9pm and from 5-10pm on Friday and Saturday.

Posted by Dianna - Promote Michigan at 1:13 PM No comments: