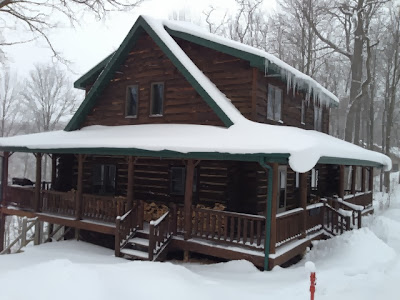 Every unit at Sleeping Bear Resort includes a fully-equipped kitchen, with stove, refrigerator, microwave and coffee maker, as well as cooking utensils. Linens and towels are also provided. The entire resort offers wireless internet access, grills and a central fire pit, for warming up after a day of playing.

With its 450 feet of lake frontage on the 40-acre Herendeene Lake, Sleeping Bear Resort is more than a summer vacation destination. In the winter months, the iced-over lake welcomes fisherman to drop a line in search of panfish and largemouth bass.

Countless opportunities exist for hiking, snowshoeing and cross country skiing just miles from the resort. Guided snowshoe hikes with a National Park ranger are offered on Saturdays and during winter holidays, starting at 1pm at the Philip A. Hart Visitor Center in Empire. Self-guided snowshoeing is also permitted on all snow-covered dunes, fields and forests in the Lakeshore. A popular trek is the Empire Bluffs trail, which offers exceptional views of Lake Michigan, the towering snow-covered dunes and the Manitou Islands in the distance.

The resort is located within 20 miles of six different cross country ski trail networks with miles and miles of trail offerings. The Sleeping Bear Heritage Trail is groomed for cross country skiing, with access at the Dune Climb, Glen Haven village and on Forest Haven Road in Glen Arbor. The famed Pierce Stocking Scenic Drive also welcomes Nordic skiers. Countless other non groomed trails can be found throughout Benzie and Leelanau counties.

Downhill skiers and snowboarders can head 21 miles south to Crystal Mountain Resort in Thompsonville for access to 45 slopes. Hiking, mountain biking and snowshoeing in the Michigan Legacy Park or cross country skiing along 40km of groomed trails is also available. A full-service spa is also available, allowing for a bit of pampering after a day out in the snow.

Discounted skiing vouchers to both Crystal Mountain and The Homestead are available to Sleeping Bear Resort guests.

Those seeking speed can access more than 135 miles of Benzie County’s groomed snowmobile trails, accessible from Sleeping Bear Resort. Staging areas can be found at the Platte River Association Hall, east of Honor; in the village of Thompsonville; and at the downtown Beulah Trailhead & Visitors Center. A trail map for the area – including Leelanau County – can be found here. Please note, snowmobiling is not permitted on the lands or waters of the Sleeping Bear Dunes National Lakeshore.

Additional activities, such as wine tastings, local restaurants, cultural venues and shopping, can be found on the Sleeping Bear Resort website.


Posted by Dianna - Promote Michigan at 5:21 PM No comments: 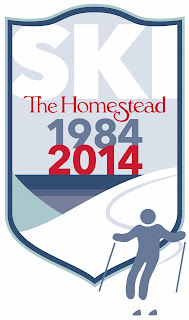 Hard to imagine there’s another Michigan winter right around the corner. Yet, The Homestead is already preparing for a season-long celebration marking three decades of ski and snowboarding fun.

“Our thirtieth ski season is a special milestone,” says The Resort’s Vice President of Sales & Marketing, Jamie Jewell. “There have been many changes to the ski area at The Homestead since it opened in 1983. It’s really amazing when you look back at how modestly it all started.”

1983 — The Homestead’s ski area opened with two three-person chair lifts, one two-person chairlift and a rope (pony) tow and state-of-the-art snowmaking equipment. Lifts were carefully installed below the tree line and closer to the ground than lifts at other ski areas for the purpose of providing a secure, safe feeling for new skiers and children learning to ski.

1985 — The Homestead became the first resort in the Midwest to limit ticket sales to prevent overcrowding.

1989 — The Homestead launched its $5 ski club program, a unique season pass for locals who paid just $5 for a pass and an additional $5 every time they came to ski.

2000 — The Magic Carpet© and was installed, along with a new “Lifetime Skills Learning Center: Ski School” and Gnomes lift-ticket and rental building.

2012 — The Homestead’s Snowsports School was remodeled

The Homestead has always been a favorite winter retreat for young couples and families with children, according to Jewell. Striving to improve service for this core group of winter guests has inspired every change to the ski area over the last 30 years.

“Children who learned to ski at The Homestead thirty years ago are now parents themselves,” she says. “There are hundreds of families that grew up skiing here. And in a way, The Resort has grown up with them. Yet some things have never changed. Namely our dedication to providing a top-notch experience, which includes limited lift ticket sales so the slopes are never crowded and the best lift ticket, rental, lesson and ski packages in Northern Michigan.”

The schedule of events celebrating 30 years of skiing at The Homestead’s is already shaping up to include many events, parties and special deals, says Jewell. Already on the docket are:

* The Homestead’s 30th Anniversary sweepstakes offering $10,000 in prizes throughout the winter season.

* Ski demo days where representatives from major ski manufacturers will be at The Homestead allowing guests to try out new, state-of-the-art equipment.

As part of its 30th Anniversary sweepstakes, The Homestead is currently running a photo contest on Facebook. Past guests who share their old ski vacation photos from The Resort get a chance to win some great prizes every month throughout the winter season. For more information on this and more 30th Anniversary events and festivals currently in the works, check out The Homestead’s website, Twitter, and Facebook pages.

Posted by Dianna - Promote Michigan at 10:10 AM No comments:

In preparation for the opening of Kuhnhenn Brewing Company's 20,000-BBL capacity production facility in nearby Clinton Township, the Warren-based craft brewer is building its distribution network with some of the most qualified wholesalers in the business.

Eastown Distributors of Highland Park, MI has been assigned the rights to the Kuhnhenn brand for its territory in Wayne County. This area includes the City of Detroit, the Grosse Pointes, and the Downriver communities; Ford Field, home of the Detroit Lions, has been pouring The Fluffer Session IPA from Kuhnhenn for two seasons now, and will get continued support from the Eastown team.

“Eastown is excited to add Kuhnhenn to our portfolio of Award Winning Michigan Beers,” Paul Quasarano of Eastown Distributors says. “We will invest heavily in local marketing and expanded distribution. Look for Kuhnhenn at all major venues in Detroit, including Comerica Park and The Joe Louis Arena.”

Ypsilanti-based O&W Distributing will distribute Kuhnhenn throughout seven counties, including the cities of Ann Arbor, Jackson, Monroe and Plymouth. The greater-Ann Arbor area, in particular, has been a trend-setting market for craft beer in the state of Michigan, while Ypsilanti is home to the Michigan Brewers Guild's Summer Beer Festival.

"We are excited and honored to be distributing Kuhnhenn Brewing Company within our market area,” says Kit Morgeson, VP Marketing, O&W, Inc. “They have built a solid reputation creating dynamic, quality beers, it will be gratifying to help them grow the brewery and bring our customers delicious beers created right here in Southeast Michigan."

In the state capitol, Lansing's Dan Henry Distributing will hold the rights to the Kuhnhenn brand in a four county region also including the cities of East Lansing and Howell. The political center of the state has seen unprecedented growth of craft beer over the last few years in terms of increased market share, largely due to the presence of Dan Henry's team beer consultants and the company's investment in the community.

While completion of the expansion of brewing operations is still several months out, the brewery sees it important to establish a dedicated and competent network or wholesale partners early on, in order to guarantee a presence in the market upon launch.

“We're in the unique position of having strong brand awareness, despite extremely limited distribution and production over the last 12 years,” stated Jon Piepenbrok, Director of Marketing and Sales for Kuhnhenn Brewing Co. “Despite all the calls, emails and personal visits from distributors in other states, our main focus is Michigan. We have chosen wholesale partners that mirror our core values and can adapt to the changing market conditions in the field of craft beer. We will go out of state, but not until Michigan is at least close to satisfied.”

The new markets will not get a huge influx of product, initially. Current production constraints do not allow a proper launch at this point; accounts will be high-spotted until supply meets demand in early 2014.
Kuhnhenn Brewing Co plans to open its Clinton Township-based Production Brewery and Public House in March of 2014. Beer is expected to flow to market by late April statewide and beyond.

About Kuhnhenn Brewing Company
Bret and Eric Kuhnhenn began brewing their own beer in college. Kuhnhenn Brewing Company was founded in 1998, selling homebrew supplies out of the family hardware store and eventually becoming licensed as a Microbrewery four years later. The brewery is consistently ranked in the top breweries in the world on beer rating websites Beer Advocate and RateBeer. They are known both for high-gravity experimental beers, and their accurate interpretations of traditional styles.

The brewery has won countless awards at competitions across the world. In 2012 they were awarded a Gold Medal in the IPA category at the World Beer Cup for DRIPA (Double Rice IPA), the largest category entered and one typically dominated by large West Coast breweries. Kuhnhenn Braggot (a mead/beer hybrid) also took home a Bronze Medal in the 2012 Great American Beer Festival.

Kuhnhenn Brewing Company operates facilities in Warren and Clinton Township, MI, as well as a homebrewing supply store, Brewing World, also in Warren. They currently employ over 30 employees, with plans to hire up to 30 more in the next six months, as expansion plans continue to allow production of nearly 20,000-barrels of craft beer and mead.

Kuhnhenn Brewing Company is a proud member of the Michigan Brewers Guild and the Master Brewers Association of the Americas.

Posted by Dianna - Promote Michigan at 9:44 AM No comments: 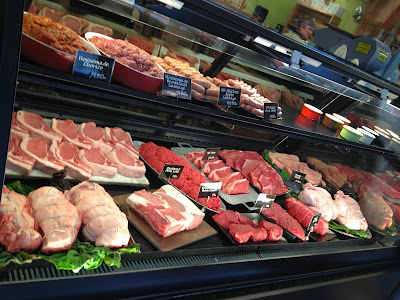 The Food Dance Market has been re-imagined and is being redesigned – open now to offer our guests sustainable, humanely raised meats such as house made sausages, cured meats, fresh ground beef, beef cuts, pork cuts and more (their very own little butcher shop)... and even more breads and savory baked goods, along with the same great pastries from their talented bakers.

“Our goal is to share with you the amazing ingredients we source from our family of purveyors,” says Food Dance owner, Julie Stanley. “We are VERY excited to offer our guests sustainable, humanely-raised meats such as house made sausages, cured meats, fresh ground beef, beef cuts, pork cuts and more (our very own little butcher shop)... and even more of our breads and savory baked goods, along with the same great pastries from our talented bakers.”

The Food Dance friendly market staff is also available to handle carry-out orders, help customers put together American cheese and meat boards, or help gusts find the perfect gift for all the foodie friends, no matter the occasion.

Food Dance creates opportunities for people to come together and connect through the experience of food. We passionately cook with the freshest locally produced ingredients and believe in giving great, caring service, and providing great experiences for everyone we come in contact with.

Posted by Dianna - Promote Michigan at 1:58 PM No comments: