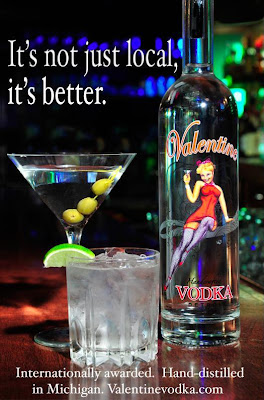 Michigan-made Valentine Vodka has been awarded a Gold medal ranking during the Beverage Tasting Institute (BTI) 20101 International Review of Spirits Competition – the largest and most prestigious annual spirits competition in the United States. The BTI gave Valentine Vodka a rating of 90 in the “Unflavored Vodka” category.

The International Review of Spirits is the most authoritative, influential and respected annual spirits competition in the United States. Major and boutique spirits producers and importers from around the world participate in the competitions each year.

Founded in 1981, BTI is recognized as one of America’s premier, independent, alcoholic beverage review organizations by leaders of the beverage industry. Millions of consumers look to BTI's fair and impartial reviews on Tastings.com when making decisions regarding the purchase of spirits.

“I founded this company with the goal of creating a world-class vodka right here in Michigan. We’ve always known that we were onto something special, but it’s really nice to get confirmation on this international level,” says founder Rifino Valentine. “To be judged as one of the world’s finest vodkas, is truly an honor. Not only is this a win for the state of Michigan, it’s a step in the right direction of our stated goal to help change the economic structure of Michigan by producing world-class products right here.”

As Detroit’s first micro distilled spirit since Prohibition, Valentine Vodka is well on its way to setting the standard for ultra-premium hand-crafted vodka with its clean, crisp and uniquely flavorful taste. As one of the first distilleries in the world to use a multi-grain recipe, Valentine Vodka proudly utilizes a blend of Red Michigan wheat, malted barley and corn, which all come directly from Michigan farmers and suppliers.

Rifino Valentine – the man behind Valentine Vodka – is a native of Leelanau County. A graduate of Cornell University, where he earned a BA in Economics, Rifino spent 11 years on Wall Street as an independent trader before founding his own successful trading firm. He returned to his home state in 2005 to create Valentine Vodka.

Through his hand-crafted products, Rifino hopes to draw on the inspiration and history that the City of Detroit brings when it comes to distilled spirits, as he develops and grows Valentine Vodka. After 3 years of intense research and study, Valentine Vodka reached the market in March, 2009.

For a list of retail outlets carrying Valentine Vodka, as well as a menu of signature cocktails, log onto www.ValentineVodka.com (www.facebook.com/valentinevodka).
Posted by Dianna - Promote Michigan at 7:43 AM No comments: 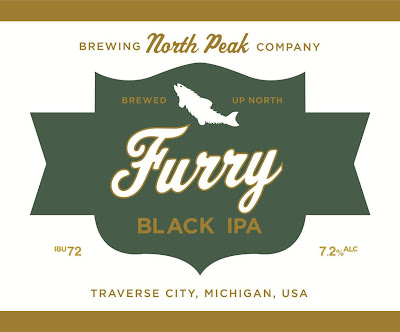 As fall turns to winter, North Peak Brewing Company is ramping up to release its latest seasonal beer – Furry. The black IPA is a wonderful winter beer. Its hoppy character is sure to warm you up on a chilly Michigan winter night.

And just where does Furry come from? As with all North Peak beers, its existence is attributed to local lore. Some say that the creature evolved its thick coat to protect itself from the extreme cold of northern waters.

“The stories that we were told growing up in Northern Michigan suggest that as the weather grows warmer during the spring, the fur-bearing trout sheds its fur, only to regrow its coat as winter returns,” says Jon Carlson, who – along with Greg Lobdell, Ron Jeffries and Mike Hall – are the managing partners of Northern United Brewing Company.

This may help explain why trout with full coats of fur are so seldom encountered.

“One of our very close childhood friends, Brad Warren, is an avid fisherman. He says that he's caught so many fur trout over the years that he sewed his own pair of pants with the pelts he's collected,” says partner Greg Lobdell. “No one has ever seen these pants, but we've never forgotten his description of the fur bearing trout and decided to name our Winter Seasonal Black IPA after his fish story. “

Made with Chinook, Columbus and Cascade hops and Pilsner, C-40, Midnight Wheat and Carapils malts, this 50-barrel production beer ranks in at 7.2% IBV (72 IBUs).

Furry will be available mid December in six-pack retro-style stubbie at retail outlets statewide (complementing Siren, Diabolical, Majestic, Vicious and the summer seasonal Archangel). It is also available on tap at restaurants and bars around Michigan.

The North Peak is part of Northern United Brewing Co., which also encompasses the Grizzly Peak and Jolly Pumpkin Artisan Ales craft beer brands, as well as the soon-to-be-released Civilized line of spirits. NUBC’s philosophy focuses on a dedication to conservation, inspiration and locally sustainable practices. All of the beers and spirits under these brands are produced at either the new 5600-square-foot facility on Old Mission Peninsula adjacent to Mission Table (former Bowers Harbor Inn) restaurant or at the original Jolly Pumpkin facility in Dexter. 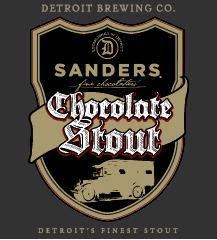 This holiday season get ready for a treat! Michigan favorites The Detroit Brewing Co. and Sanders Candy have partnered to create Sanders Chocolate Stout, a unique seasonal beer.

In the fall of 2009, Detroit Brewing Company began tinkering with their Pub Classic Smooth Cream Stout in order to make the best Stout available. A chance meeting, over a few beers, with the folks from Sanders brought the final sweet ingredient. As a result of this Michigan combination, Detroit Brewing Company’s Sanders Chocolate Stout was created. Detroit Brewing Co. found the best way to combine Stout and Sanders chocolate to create the dark, satisfying aroma and flavor of a fine Stout Ale with the restrained richness and elegance of the hand selected cocoa used by Sanders Fine Chocolatiers in Detroit since 1875.

Travis Fritts, Head Brewer for Detroit Brewing Co., says, “We are excited and proud to work with a great Michigan company like Sanders to create a special beer made for Michigan by people from Michigan.”

Starting November 23rd, it will be available at Lockhart’s BBQ restaurant, Hiller's, Busch's, Whole Foods and wherever local craft beer is supported and sold.

Sanders has been a Michigan and Metro Detroit staple since 1875 when Fred Sanders opened his first store in Downtown Detroit. The premium ingredients used to make Sanders famous cakes, ice cream, toppings, chocolates, and caramel continues today. Sanders products can be found in multiple retailers across Michigan and the US, or visit one of our many stores, www.sanderscandy.com.