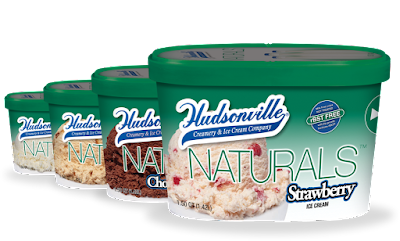 In celebration of the spring season and Earth Day, Hudsonville Ice Cream proudly announces an expanded all-natural line of flavors which will be part of their All Season portfolio. The four flavors, available in the green packaging, include Vanilla Bean, Salted Caramel, Strawberry and Chocolate Cocoa Bean.

“This new product line focuses on a clean ingredient label, using only simple and natural ingredients for a finished product that is rBST free,” says Raymond Sierengowski of Hudsonville Ice Cream. “In fact, not only is our Naturals line rBST free, but our entire line of products are and always have been rBST free. More than 20 of our products are also gluten-free.”

• Vanilla Bean: Created for those who cannot get enough of the great taste of Vanilla, this extra decadent flavor satisfies the most discerning palette. Perfect alone or for pairing with your favorite homemade pie!

• Strawberry: Natural ingredients in this traditional hand-crafted flavor are bursting with real strawberry flavors and colors.

“Hudsonville Ice Cream partners with family-owned and operated dairy farms of the Michigan Milk Producers Association to ensure the milk and cream used in Naturals is as fresh as possible,” Sierengowski says. “In fact, the milk we use travels less than an hour from the farm to our facility.”

This Naturals line delivers real flavors: milk, cream, cane sugar, strawberries, vanilla, organic cocoa and other real ingredients. No artificial colors or flavors of any kind are used in Naturals. Cane sugar makes Naturals sweet – not corn syrup or high-fructose corn syrup. It’s as Natural as it gets!

These, and countless other Hudsonville Ice Cream flavors can be found in grocery stores and ice cream parlors in Michigan, Indiana, and Illinois. In addition to its “All Season” flavors, which are available year round, several “Limited Edition Flavors” are offered on a limited basis throughout the year.

Started in 1895 as a farmers’ cooperative, the Holland-based Hudsonville Creamery & Ice Cream is the largest manufacturer of branded ice cream in Michigan. For more than 80 years, this Midwest company has been producing its creamy, delicious ice cream – using many of its original flavors, while at the same time creating refreshing new recipes inspired by the Great Lakes.
Posted by Dianna - Promote Michigan at 7:56 AM No comments: 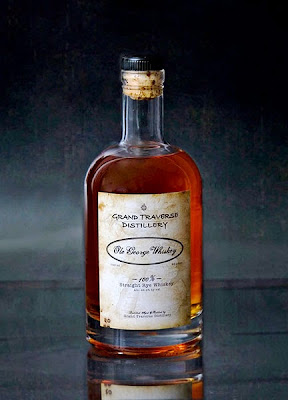 “We are honored to again be recognized by such an esteemed organization as the American Distilling Institute,” says Grand Traverse Distillery President Kent Rabish, who also serves as Vice President of the Michigan Craft Distillers Association. “Michigan continues to garner national attention for its quality products and we’re happy to be part of the growth of this industry.”

Ole George was awarded “Silver – Best in Class “as well as “Gold – Best in Category” for a Craft Rye Whiskey. Landis Rabish, Lead Distiller, was on hand to accept the awards for the Distillery and was thrilled to have crafted such a popular and award winning Rye Whiskey.

Since opening in June of 2007, GTD has prided itself as a “Grain to Bottle” craft distillery which supports the state’s active agriculture industry. It is the only distillery in Michigan to have every single Whiskey, Vodka and Gin we produce “Pure Michigan” certified.

Grand Traverse Distillery has added another accolade to its impressive award-wining portfolio with the recent “Best of Category – Gold Medal” honor in the Aged Rye Whiskey category for “Ole George”. The award was presented in early April in Colorado by the American Distilling Institute at its 7th Annual Judging of Artisan American Spirits. The Traverse City-based distillery has won awards for its various vodka brands – this is its first award in the whiskey category.

Grand Traverse Distillery operates tasting rooms throughout the state, including three in Traverse City (the original location on Industrial Circle, in The Village at Grand Traverse Commons and a new location on Front Street downtown), River Place Shops in downtown Frankenmuth, a seasonal tasting room in Leland on the Leelanau Peninsula, not far from historic Fishtown, and a new location at the Downtown Market in Grand Rapids.

Posted by Dianna - Promote Michigan at 9:23 AM No comments:

How Sweet it Is! Michigan Beers Crafted with Locally-Sourced Maple Sap & Syrup 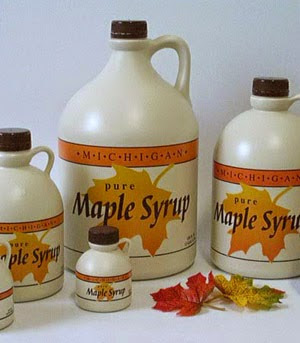 Michigan boasts a rich agricultural heritage, and maple sugaring is the oldest—dating back to the Native American’s early history in the state.

Did you know that Michigan ranks 5th nationally for maple syrup production? Or, that it takes approximately 40 gallons of maple sap to make just one gallon of syrup? Learn more Michigan maple syrup facts here.

Michigan brewers are finding a sweet reward in crafting beers using maple sap and syrup to develop unique spring beers. Look for these beers in mid- to late-April.

Tree Blood (6.5% ABV | 28 IBUs). This is a traditional American stout brewed in an untraditional manner. All of the water is replaced with Maple sap that's fresh from the tree. As with any of our harvest beers through the season the recipe isn't adjusted from year to year, instead the conditions of the harvest make each year's batch unique. The sugar content of the sap will vary from 1-3% in the years we've done it while the mineral content of the sap can change dramatically. It gives each season's batch a special quality that represents the year for the maple tree stand. Since the sap hasn't been processed it doesn't lend the familiar maple syrup sweetness to the beer, instead it gives Tree Blood a wood barrel aged quality with subtle hints of maple and earth. ABV will vary as the sap will lend different sugars each season.

Blandford Maple Amber (6% ABV). Made in partnership with Blandford Nature Center, this beer uses Belgian yeast and pure maple syrup made locally. Look for it sometime this spring.

Waukazoo Wit (4.9% ABV | 14.9 IBUs). This spring summer seasonal is a straw-colored Belgian style wit bier. Has a low to moderate bitterness and is slightly cloudy in color, due to its traditional wheat-heavy malt bill. Finishes with spicy yeast tones and savory coriander, as well as an earthy, citrus aroma. The first 2015 batch is brewed with 100% maple sap water.

Morazan Amber (5.5% ABV | 24.5 IBUs). This crisp, malty amber ale is brewed with Leelanau maple syrup and hops. It is light to medium bodied, with a faint honey-malt sweetness.

North Shore Iron Works (10.5% ABV | 25 IBUs). This Barleywine, brewed with five gallons of Michigan honey AND Michigan maple syrup, is a warming brew with rich, caramel flavors. North Shore Iron Works was incredibly helpful with the renovation and opening of Right Brain's brewery expansion in 2012. We made a strong, but complex beer in their honor. It's currently available in 22oz bottles, and on tap in the brewery.

Ain’t Jemima (6.3% ABV | 22 IBUs). The brewers replaced 100% of their brewing water with fresh maple sap directly from locally tapped maple trees. Caramel and Munich malts help build complexity around the unique maple character. This truly seasonal drifter is the first release annually of our Permaculture Series. It’s brewed every spring as the snow melts and sap starts to flow through the Maple trees of West Michigan. No artificial maple flavor used, this is the real deal.


The Michigan Brewers Guild was formed in 1997 and held its first festival in July 1998. Today, the Guild hosts four festivals dedicated exclusively to Michigan craft beer produced by its nearly 150 member breweries.

Michigan’s thriving brewing industry conservatively contributes more than $144 million in wages with a total economic contribution of more than $277 million. In terms of overall number breweries, microbreweries and brewpubs, Michigan ranks #5 in the nation – thus supporting its claim as “The Great Beer State.”

The Guild exists to unify the community of brewers, to increase the sale of Michigan Craft Beer, to contribute culturally and economically throughout the state, and to monitor and assure a healthy brewing industry. By working collaboratively with proponents of craft beer, we strive to achieve a 10% share of all beer sold in Michigan by producing world-class events, increasing public awareness, educating consumers, and encouraging responsible consumption.

Posted by Dianna - Promote Michigan at 2:54 PM No comments: 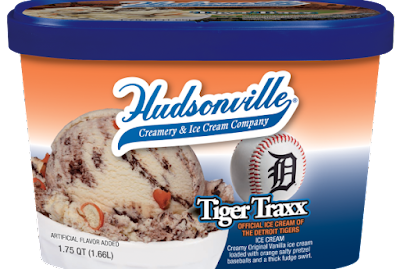 Spring means the arrival of two great loves—baseball and ice cream. The latest Limited Edition flavor from Holland-based Hudsonville Ice Cream brings together these two passions with the release of Tiger Traxx—the Official Ice Cream of the Detroit Tigers.

Tiger Traxx brings a taste of the ballpark home with you. Your family will cheer for creamy vanilla ice cream, loaded with chocolate covered pretzel baseballs and a thick fudge swirl. Enjoy this Limited Edition flavor while cheering on your favorite hometown baseball team.

This is the fourth season that these two Michigan organizations have teamed up. Tiger Traxx and five other flavors will be available in the “Big Cat Court” section of Comerica Park, as well in the ballpark suites, throughout the full season. Tiger Traxx will hit retail freezer cases in mid-April, through early September.

Hudsonville Ice Cream flavors can be found in grocery stores and ice cream parlors in Michigan, Indiana, Ohio and Illinois. In addition to its “All Season” flavors, which are available year round, several “Limited Edition Flavors” are offered throughout the year.

Started in 1895 as a farmers’ cooperative, the Holland-based Hudsonville Creamery & Ice Cream is the largest manufacturer of branded ice cream in Michigan. For more than 80 years, this Midwest company has been producing its creamy, delicious ice cream – using many of its original flavors, while at the same time creating refreshing new recipes inspired by the Great Lakes.
Posted by Dianna - Promote Michigan at 11:48 AM No comments: