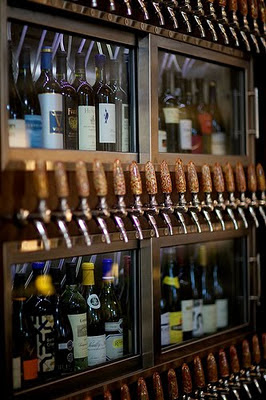 Reserve Wine & Food is home to one of the country’s largest cruvinet systems, holding 102 wines that are served by the glass. As the focal point of the bar area, the cruvinet system – with its hand-blown glass from local artist Joe Sherry – stretches some 36 feet (3 rows, 12 feet each) and is proudly displayed under the 2009 ArtPrize winning entry, Open Water, by Ran Ortner.

The cruvinet is a custom-build, temperature-controlled wine preservation system that works much like a keg system for beer taps. The cruvinet pumps nitrogen into the bottle of wine as wine is poured through a different set of tubing. This creates a barrier of gas between the wine and potential oxygen, therefore, extending the life of the wine for as long as six weeks.

“This intricate wine preservation system extends the life of wine exponentially, giving Reserve the liberty to offer a wider range of varietals and price points,” says Peter Marantette, General Manager. “We can now pour a bottle that other restaurants wouldn’t dream of opening, for fear that they wouldn’t sell it before the wine turned.”

There are only a handful of restaurants and bars in Michigan that use a cruvinet system, most of those under 25 taps. Even on a national and international scale, few are as impressive as that which Reserve operates – most claim between 25 and 55 taps. The Ristorante Panorama inside Philadelphia’s Penn’s View Hotel has a 120-bottle cruvinet system and is believe to hold the “Guiness Book of World Records” for the largest system of its kind in the nation.

“To the best of my knowledge, the cruvinet in Pennsylvania is the only system out there that is larger than Reserve’s,” Marantette says. “We definitely operate the largest system of this kind in Michigan and the Midwest.”

Located in the heart of downtown Grand Rapids at 201 Monroe Avenue NW, Reserve Wine & Food offers a world-class menu fully embracing the West Michigan farm-to-table philosophy, paired with over 100 wines available by the glass and 200 wines by the bottle, in an elegant yet casual fine dining setting. In the fall of 2011, Reserve was named a winner of OpenTable Diner’s Choice Awards for Top Wine Lists in the United States, one of only two restaurants in Michigan to be recognized.
Posted by Dianna - Promote Michigan at 5:29 AM No comments: 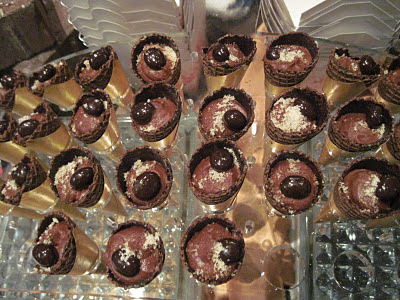 Organizers of the Grand Rapids International Wine, Beer & Food Festival are happy to report that attendance jumped more than 12% – to some 12,000 people – for their fourth-annual event, which was held November 17-19 in the elegant 40,000-square-foot Steelcase Ballroom inside DeVos Place. That’s four consecutive years of growth – in terms of both attendees and exhibitors.

“Grand Rapids is the perfect size city for this type of event,” says Henri Boucher, show producer. “It comes alive because it’s such a dynamic downtown – an area that is the envy of all of Michigan. We’re proud to host this event, which is the true kickoff to the holiday season.”

Considered the largest food and beverage festival in the state and one of the premier events of its kind in the Midwest, the Grand Rapids International Wine, Beer & Food Festival has shown steady growth since its first year in 2008. That year, some 8000 people attended the festival. In 2009, organizers welcomed a 30% increase in the number of exhibitors and beverages, and twice as many restaurants – welcoming nearly 10,000 guests throughout the three-day festival. Close to 11,000 attendees were reported in 2010.

“This fourth annual event once again exceeded our expectations,” says Richard MacKeigan, Regional General Manager, DeVos Place, DeVos Performance Hall & Van Andel Arena. “We believe we are in the early stages of an event that will be around for a long, long, time. Comments from exhibitors, sponsors and most importantly guests have determined that 2011 was a grand success. The feeling seems to be that the Grand Rapids International Wine, Beer and Food Festival is another great reason why Grand Rapids is such a great city to live and work in.”

The three-day festival spotlights more than a dozen restaurants; hundreds of wineries, breweries, distilleries and thousands of their products; countless local businesses; and the area’s leading industry experts who deliver countless seminars, workshops and demonstrations at no added cost to attendees. Dates for 2012 are moved up a week, to November 8-10.

“We are proud to produce the finest wine festival in the Midwest,” says show manager, Cathleen McDonald. “It comes together because of the great exhibitors – wineries, breweries distributors, restaurants and retailers – that we have the pleasure of working with.”

COMMENTS FROM EXHIBITORS
“The event far exceeded our expectations,” says Brad Dahlhofer of the Michigan-based B. Nektar Meadery, who made his first appearance at the festival this year. “The response to our Zombie Killer cherry cyser was off the charts. We'll definitely be there next year!”

“What a great way for us to get our name out to the West Michigan community,” says Theresa Arkesteyn of Great Lakes Pierogies, who was also new to the show this year. “The amount of visibility we received exceeded our expectations! We had great time serving our pierogies to the public and had great response from all! Can't wait till next year!!!”
“We received very positive feedback and our products sampled well as we had a consistent line the entire event,” says Jennifer Baranska, representing Buitoni. “Our intention was to target potential Buitoni customers and drive total brand category awareness in the Grand Rapids local market… it was an extremely successful event. I cannot wait until next year.”

“We had a great show and the traffic was super on Friday and Saturday, [with] quality attendees who were fun to talk to and very receptive to tasting,” says Mike Freestone, owner of Good Life Granola, who exhibited in the Riverfront Marketplace for the second consecutive year. “I look forward to being there next year and would love the same spot...two thumbs up!”

COMMENTS FROM ATTENDEES
“I loved the show! A great way to meet innovators and businessmen and women who are bringing outstanding products to Michigan.” ~Rebecca Eyke, editor of Michigan HOME & Lifestyle Magazine

“Thank you, Fred, and Gail Ambrosius, for creating a wonderful and inspiring experience. This seminar was the highlight of our visit!” ~Jennifer Reed, via Facebook

“My family and I had a GREAT time for the third year in a row. Thanks for a memorable experience! Sadly, however, I dropped by beer glass on the way to the car :( It was lovely while it lasted though, nice addition to the usual wine glasses.” ~Kaitlyn Winter, via Facebook

“Had a great time last night and enjoyed all the wine choices I selected.” ~Lisa Baird Karafa, via Facebook 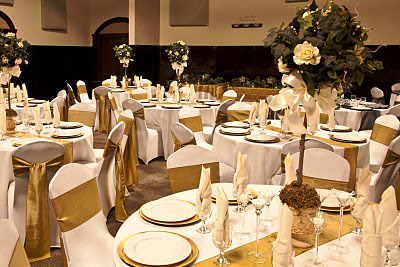 In the facility previously known as the “Bier Hall”, SBC has upgraded décor, expanded services and has hired Jodie Howitt to serve exclusively as Event Coordinator for the newly named “Singapore Room”. Jodie comes to SBC with a strong hospitality background, having planned all aspects of special events for Fortune 500 companies as well as many wedding ceremonies and receptions. The Singapore Room is a full service banquet facility complete with bar, stage, dance floor and multiple lighting options and can accommodate well over 200 seated guests. A Grand Opening is planned for Fri. Nov. 18th 5:30-9:30. This will be an open house featuring SBC beer, wine and appetizers.

Saugatuck Brewing Co. is a microbrewery with a traditional Irish style pub and upscale banquet room that features hand crafted beer, wine, food, and service. Fifteen unique beer styles, all brewed in house, plus wine and hard cider are served daily in the Pub. “SBC” also distributes five styles in 6 and 4-packs throughout lower Michigan. The brewery also features the only active brew-on-premise facility in Michigan, utilizing five copper kettles and an array of natural ingredients and recipes, for the public to become “Brewmaster for a Day.”