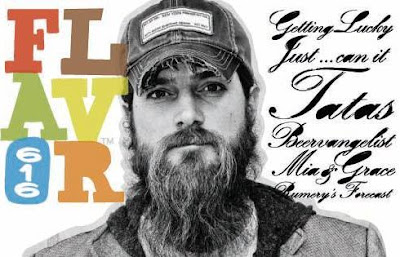 West Michigan has garnered national attention in recent years for its thriving culinary, beverage and agricultural offerings – offering a prime foodie destination centrally located between Chicago and Detroit. Flavor 616 magazine is being introduced in January to celebrate this culture and share the stories behind the area’s top eateries and producers.

“We are extremely fortunate to have the support of some of the region’s top writers, photographers and designers who believe in what we’re doing and want to be a part of something bigger,” says CEO/Publisher Rod Glupker – who honed his experience in the publishing and culinary worlds during 4 years as magazine manager at the now defunct Food For Thought magazine. “The energy that this group of individuals brings to the table is contagious and we are so excited to see what the coming issues may bring.”

Articles in the inaugural issue include a feature of Jarred Sper of Perrin Brewing Company in Walker by Tiffany Ewigleben; a focus on Mia & Grace restaurant in Muskegon by Marla Miller; “Getting Lucky” (Auspicious Foods for the New Year) by Michelle Swift; George Aquino’s “Foodienista” take on West Michigan eats and eateries; Allie Merrick’s “My Wine Words” column; “Spicing up those Tatas” by Cindy Krzykwa; Just Can It by Missy Black; the column “Beer and Food with The Beervangelist” by Fred Bueltmann and much more.

Flavor 616 will be distributed for free, monthly, and will launch with a circulation of 10,000 copies at locations throughout Grand Rapids, Holland, Grand Haven, Muskegon and everywhere in between. It will also be available in PDF format online at www.Flavor616.com.
Posted by Dianna - Promote Michigan at 2:09 PM