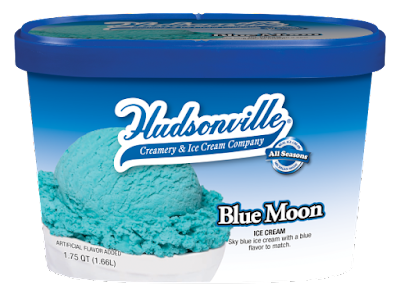 The sky tonight will shine brightly with a Full Moon—a rare Blue Moon (the second full moon of the month of July, 2015). Holland, Michigan-based Hudsonville Ice Cream invites you to celebrate this celestial show with a scoop or two of its Blue Moon flavor.

Introduced in the mid 1950s, Blue Moon ice cream is a popular kids’ flavor because it makes their tongue and mouth turn a vibrant color, while adults like it because it evokes memories of their childhood.

“The Great Lakes Region seems to be the only place in the United States that serves Blue Moon,” says Larry Schipper of Hudsonville Ice Cream. “The flavor is actually called Blue Moon and most people equate it to an almond flavor, but I’ve had some people say they taste cinnamon or even pumpkin.”

The exact flavor profile is a deep, dark secret, and while Blue Moon is a beautiful mystery on your taste buds—matching the aura of the Great Lakes—its vibrant color and elusive flavor make it one of the most talked about ice cream flavors.

Find Hudsonville Ice Cream Blue Moon at Frosty Boy in Kalamazoo, Jersey Junction in East Grand Rapids, Ottawa Beach General Store in Holland Fantasy Twirl in Burnips, among many others. Of course, you can also purchase Blue Moon in 1.75qt containers at retail outlets around Michigan.

Started in 1895 as a farmers’ cooperative, the Holland-based Hudsonville Creamery & Ice Cream is the largest manufacturer of branded ice cream in Michigan. For more than 80 years, this Midwest company has been producing its creamy, delicious ice cream – using many of its original flavors, while at the same time creating refreshing new recipes inspired by the Great Lakes.

Posted by Dianna - Promote Michigan at 11:20 AM